Bambi and I left the isle of Iona this week on a suitably dreary day. The fog-shrouded harbor and the gently misting rain bore silent witness to our heaviness of heart. It is not easy to leave so dear a friend.

Most people find that rain adds to the gloominess of a sad occasion. As a pastor, I often hear someone mutter by a rain-soaked graveside, “What a terrible day for a funeral!”

“Not for me,” a friend of mine from another time and place always answered. “To me the rain means God is crying too.”

That’s how I felt as we got on the ferry to leave Iona, the rain wrapping us in its misty embrace: I felt like God was crying too.

Iona is a tiny isle off the west Scottish coast where a sixth century saint named Columba founded a monastery. He landed there while fleeing his demons, hoping to find tranquility and peace. He and his hearty band of twelve island-hopped until they reached an island from which Columba could not see his homeland. That island was Iona and there, he and his disciples built a monastery and launched their mission to the mainland. That’s why the Scots call Iona the “cradle of Christianity.” For them, it is.

During Columba’s life, pilgrims came from faraway places, seeking his counsel and blessing. After he died, many sought burial near him, including nearly forty Scottish, Irish, and Scandianian kings. It was believed at the end of time the saints would rise first. Even so august a soul as Macbeth was buried on Iona in the hope he would be caught up in the great saint’s rising. Thus, since Columba’s time, Iona has been a place of pilgrimage.

I came to Iona as Columba did and others do, seeking spiritual peace and renewal. I wasn’t so much fleeing my demons as yearning for a deepening of my life God or perhaps, better said, of God’s life in me. And like countless pilgrims before me, God found me, touched me, and gently changed me as I traipsed about that windswept, sea-ringed plot of land. Somewhere between my arrival and the rain-soaked day of my departure, one week later, Iona became holy ground for me.

For many pilgrims to Iona, the church and Abbey built on the ruins of Columba’s originals are central to their spiritual renewal on Iona. To me, those were important, but not quite so formative. For one thing, Bambi and I didn’t stay at the Abbey but at a Bed and Breakfast on the other side of the island, removed from the hubbub. It was on our daily walks to and from the village, nearly a mile distant, that I most felt God’s nearness. I felt God’s nearness in the animals, ever-present and never far from one’s touch–the sheep and goats and chicken, baaing and squawking their praise and yes, their demands to their Creator; in the ever-present sea, rarely out of sight and lapping the shore on every side, reminding me of the primordial soup from which all life came (Genesis 1:2); in the persistent wind rustling even my hair-sprayed stiff mane, as though an unseen hand was tousling my hair; and yes, in the Word of God “hidden in my heart” (Psalm 19:11, KJV) each morning and pondered throughout the day. 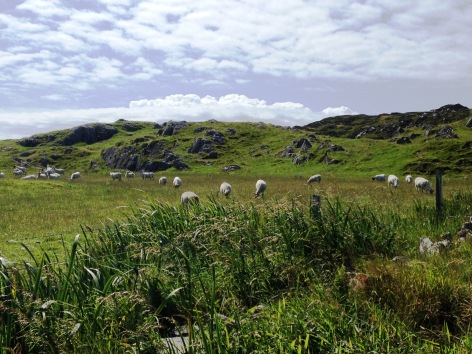 It is surely true, as the poet said, that “Earth’s crammed with heaven and every common bush afire with God.” But most of the time we are too busy, preoccupied, or consumed with self-importance to notice. So we need places and practices that awaken our spiritual center and our senses to the One who is ever near, the One in whom we “live and move and have our being” (Acts 17:28). We need Jesus, as surely as any blind or deaf soul in the Gospels, to give us “ears to hear and eyes to see.”

And so, Iona became for me what it became to countless pilgrims before me: Holy Ground. It became what the burning bush on Mount Sinai was to Moses: the place where the living God surprised my reverie with the summons, “Take off your shoes, son. The place where you are standing is holy ground” (Exodus 3:5). For me, Iona became the place I discovered anew how deeply I, all God’s creation, all God’s creatures, and all God’s children are passionately beloved by the One who breathed them into life and breathes life into them still.

Little wonder the sky wept with me on that misty morning I boarded a ferry to leave.

If you’d like to be notified of new blog posts by email, click on the menu icon at the top center of this page (just above the circle logo) and enter your email address in the space provided.